24th March I went for voluntary psychiatric evaluation. Since then I have been weaned off Lithium and Trepalan was the replacement. It needed to be a slow, monitored process. I spent Easter away from my family, which was tough. Suicidal ideation increased and a few nights I couldn’t sleep, even on 3 mg Ativan and 20mg Seroquel. That’s called a knock out punch in medical terms. I swear I two had out of body or psychosis experiences, but with weak nursing staff on duty- you are left to feel belittled.

The next part of the blog has a trigger warning:
Through curiosity, a few days ago I took my razor and placed it on my pulse.
It raced a little.

Almost a pity it was so blunt, I couldn’t get a grip: side to side, up and down, gently- I didn’t want to make a mess.

“What are you doing, my love?” My roommate took the razor and basically saved my life. She kept the weapon with her as I sadly replied “I just wanted to see how it works”

At “Pill” time I confessed to the nurse about my weak attempts at my baby cuts. She went into a panic and demanded the razor. A few hours later, they  confiscated the razor (my roommate was great at disappearin when  needed).

Two days of healing left me with the urge to write a sad poem and the urge to cut again. This time I had an even more  blunt tools: a set of tweezers and a black pen. After taking my nightly tablets from the night staff who annoy me, I decided to cut again.

This time I wanted to see blood or something.

I held the tweezers in position and stab, stab. Nothing!

I tried again. This time I’d stab and drag it really hard.

What the hell is wrong with me?

No  blood, just pain. This ‘killing-yourself’ thing is really difficult.

After a few jabs, I gave up . It was too sore. So I took my black pen and drew some cuts 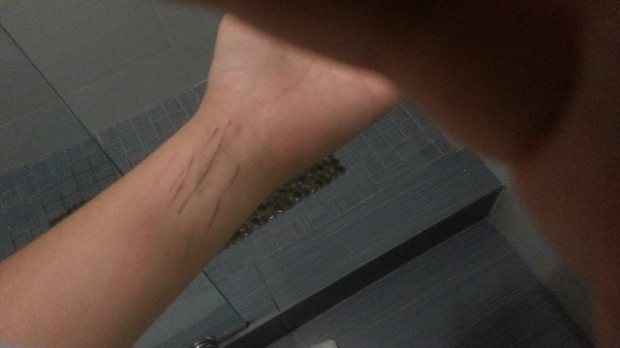 There you go, now you have some cuts, Yvette.

My psych obviously asked me about why I did it.

I told him I didn’t want to die, I was just looking for life in my veins.

7 thoughts on “Psychology of psychiatric care”

Come on, talk to me- what did you think? Cancel reply

Life is more than a series of bumps and unexpected turns; it’s a journey that etches every unique print on our finger tips! And here in my corner, I’d love to share my learning curves with you. I’m a mother and have experienced both being a single parent as well as being in a loving marriage. I have 3 boys, all unique and have stories of their own. I’m wife to one amazingly, supportive husband.

Categories featured on this Blog

The Non-Adventures of a Stay at Home Mum
nombredelapluma

A scribe whose nickname allows her to dream

Welcome to the West Coast!

Go forth boldly in the direction of your dream.