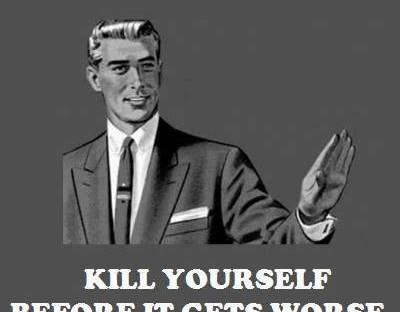 Images like this (see below) work on my nerves- to put it mildly. 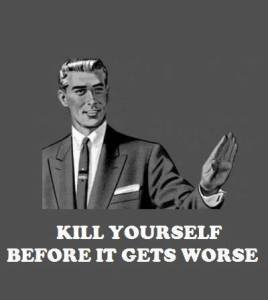 I don’t think people realize the number of individuals out there, who suffer from mental illness, let alone the number of people who are on the edge, ready to jump. Messages like this are ignorant and show that the sender, or whoever encourages this kind of mentality does not think of the consequences of their actions. Even sending it to a friend is stupid. Have you been in your friend’s lately? There might be a suicide plan lurking around.

Sometimes, I wish that mental illness had a face. And it was the face of whoever was closest to someone who randomly shouts, “Go kill yourself man. Do it, I dare you.” If you saw that mental illness as someone you cared for dearly, maybe you would be more sensitive to someone who is suffering with their illness. We show sympathy to someone in a wheelchair (more often than not) and want to donate money to shelters and save rhino’s, but yet we stay clear of mental illness. Both physically and emotionally people keep their distance from mental illness. All that does is perpetuate the stigma.

Maybe I’m sensitive about this issue, and so what? Maybe we all should be more sensitive. There are people out there who are tormented by various mental illnesses, losing their families, their jobs- and they’re dying on the inside. Others are on the edge, ready to jump.

I think they could do with some sensitivity. Not pity, but rather understanding.

Just a little rant from my side.

P.S What a stupid picture!!!

2 thoughts on “Insensitivity to the mentally ill”

Come on, talk to me- what did you think? Cancel reply

Life is more than a series of bumps and unexpected turns; it’s a journey that etches every unique print on our finger tips! And here in my corner, I’d love to share my learning curves with you. I’m a mother and have experienced both being a single parent as well as being in a loving marriage. I have 3 boys, all unique and have stories of their own. I’m wife to one amazingly, supportive husband.

Categories featured on this Blog

The Non-Adventures of a Stay at Home Mum
nombredelapluma

A scribe whose nickname allows her to dream

Welcome to the West Coast!

Go forth boldly in the direction of your dream.